Rated 0 out of 5
Raised Percent :
0%
This campaign has been invalid or not started yet.
Ohafia, Nigeria

Here is what your investment covers

The Large White pig is a breed of domestic pig originating in Yorkshire. It is also known as the Yorkshire pig and the English Large White pig. It is one of the most popular and most numerous of all pig breeds, and widely used in crossbreeding for intensive pig farming system around the world. As the name suggests, the breed is truly big in size and pure white in colouration. The Large White pig breed was one of the original founder breeds of the National Pig Breeder’s Association and the breed was first recognized in 1868. Currently, Large Whitesbreed is very popular and mostly raised commercial pig breed around the world.

As the name suggests, the Large White pig is large in size and of pure white colouration. It has white or pink skin, dished face and erect ears of pink colour. The breed is easily distinguished by its large size, picturesque bearing, erect ears and a dished face. It has excellent conformation with good hams. It is huge in size and coarse boned but is quite sound in feet and legs. Their length of legs and extra height help them to remain active and they have long useful lives in the breeding pen. 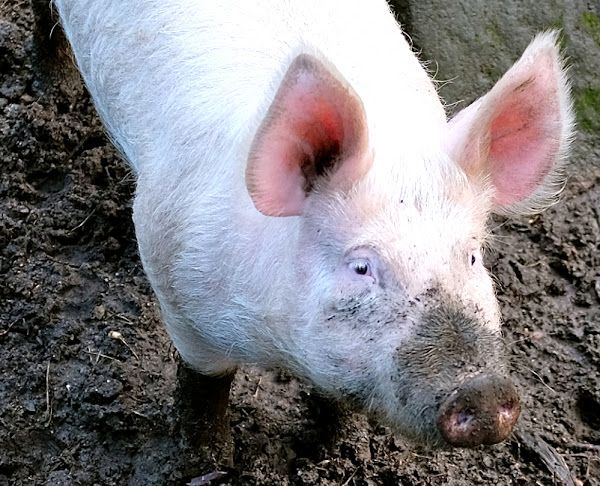 The Large White pig is a rugged and very active and hardy breed. It can withstand variations in climate and do well in other environmental factors. These animals have been known for decades as a favourite market animal where high-quality bacon and pork are sought. The sows are known for having excellent maternal instincts, large litters and also for heavy milk production. When the breed was developed, it was actually developed as an active and outdoor breed which was good for extensive pig farming system. The animals are also very good for crossbreeding. And their ability to cross with and improve other breeds has given them a leading role in commercial pig farming system and breeding pyramids around the world. However, review full breed profile of the Large White pig in the chart below.